As we move into 2022 the focus within the maritime industry remains centred on the protection of the environment and the pathway to significant decarbonisation of the sector by 2050. To incentivise the industry and ensure the decarbonisation targets can be met, several regulations such as EEDI and EEXI/CII have been put in place by the IMO that place increasing pressure upon owners and operators to reduce their emissions.

The industry is still in a technological transitionary period to meet these requirements. Owners and operators would therefore be wise to consider all possible forms of GHG emission reduction on the pathway to 2050 to avoid significant impact on capital and operational expenditure over the coming years.

One often overlooked contributor to the fuel efficiency and total emissions of a ship are the impacts of biofouling. Biofouling is the build-up of marine organisms on a ships’ hull over time. It begins with the adherence of organic molecules to the hull surface, these molecules attract microorganisms to feed on them, initiating the development of a biofilm. Once established, complex macro organisms such as barnacles, sponges or mussels can begin to feed on the film and establish themselves on the hull.

In severe biofouling cases there can be a significant and complex colony of marine life established. Some studies have shown that as little as 10 minutes emersion in water is enough time to begin attracting organic molecules to an untreated surface, highlighting the importance of adequate control measures.

It is easy to make the assumption that the biofouling effect could be ignored to a point providing the extent is minimal, however preliminary findings from an upcoming IMO report show that this is not the case. Even light coatings can have significant effects on hull surface smoothness and vessel drag performance.

The report (due to be published in full next February) produced by Glofouling in partnership with the IMO focuses on biofouling. The first part of the report consists of a literature review summarising the existing data linking biofouling and GHG emissions. Although the full review is not yet available, the preliminary publishing has summarised the collated data in the chart below: 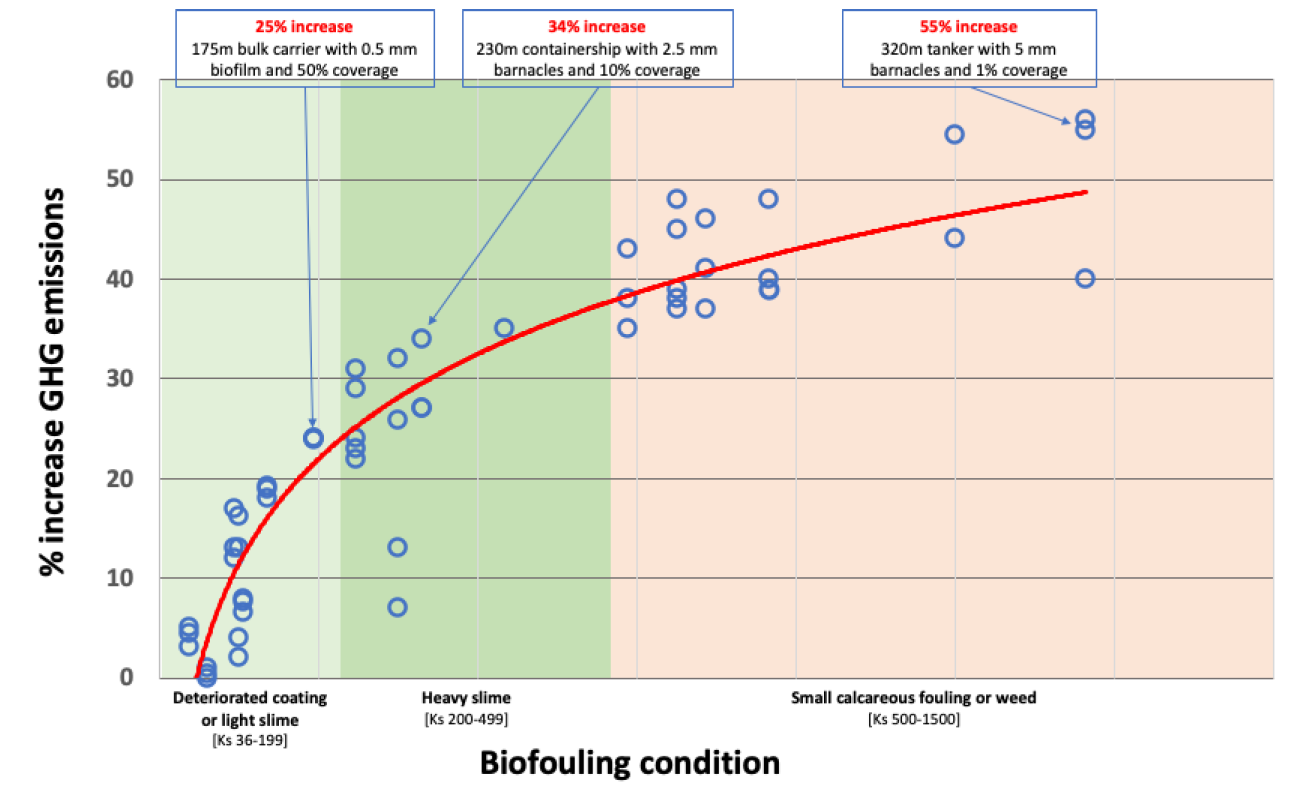 The data summary shows that for even a ‘light’ biofouling that covers only 50% of the hull, there can be up to 25% increased GHG emissions. The underlying story here of course is that those emissions are not being produced by the bio-organisms, they are a direct result of the increased fuel consumption required to maintain the same vessel propulsion power under biofouling conditions.

Studies estimate that biofouling can increase vessel drag by as much as 60% with a corresponding fuel consumption increase as high as 40% for the same desired power as a clean vessel, dependent on the fuel used the costs to owners can become quite significant. In addition to secondary costs such as increased need to take on bunkers and the associated costs of doing so as well as the potential for increased emissions when operating in emission reporting areas such as the EU MRV zone.

The Carbon Intensity Indicator (CII) requires ships to continuously improve their efficiency over time compared against a 2019 reference line based on average industry performance that is subject to a reduction factor of 2-5% each year. An effective biofouling control plan holds powerful benefits in helping to meet the CII targets, both as a method of reducing carbon emissions and avoiding unnecessary OPEX.

There are several methods of biofouling control such anti-fouling paint, chemical or ultrasonic Marine Growth Prevention Systems and a regular schedule of inspection and cleaning. The correct system to use will depend on the characteristics of the vessel as well as its operational area and with proper management owners should revisit their control measures on a regular basis to see whether improvements can be made. The IMO has issued guidance to assist with this practice.

MEPC.207 (62) outlines guidelines for the control and management of ship biofouling and we would urge all owners to strongly consider implementing the same. The guidelines recommend the implementation of a biofouling management plan and associated record book. An effective BFMP should outline the details of any biofouling control measures in use and their associated operating conditions, the locations on the hull susceptible to biofouling and the schedule for inspection/cleaning and maintenance of all anti-fouling systems.

The record book should track the details of all inspections and biofouling control measures used on the ship so that it can be used by owners as a continuous improvement document, assessing the efficacy of control systems and allowing owners to make informed choices for selection of measures going forward.

It is clear that biofouling should be an important consideration for owners from an environmental and cost perspective, in the past the cost of inspection and maintenance to deal with biofouling may have led owners to do the bare minimum but it should now be apparent that it is far cheaper to minimise biofouling in the first place than deal with the hidden costs once it is established.

The full report on biofouling is expected in February 2022 at which time this article will be revisited with any relevant updates but there is nothing to stop owners getting ahead of the curve now and implementing strong biofouling controls for the benefit of the Earth as well as their bank accounts!