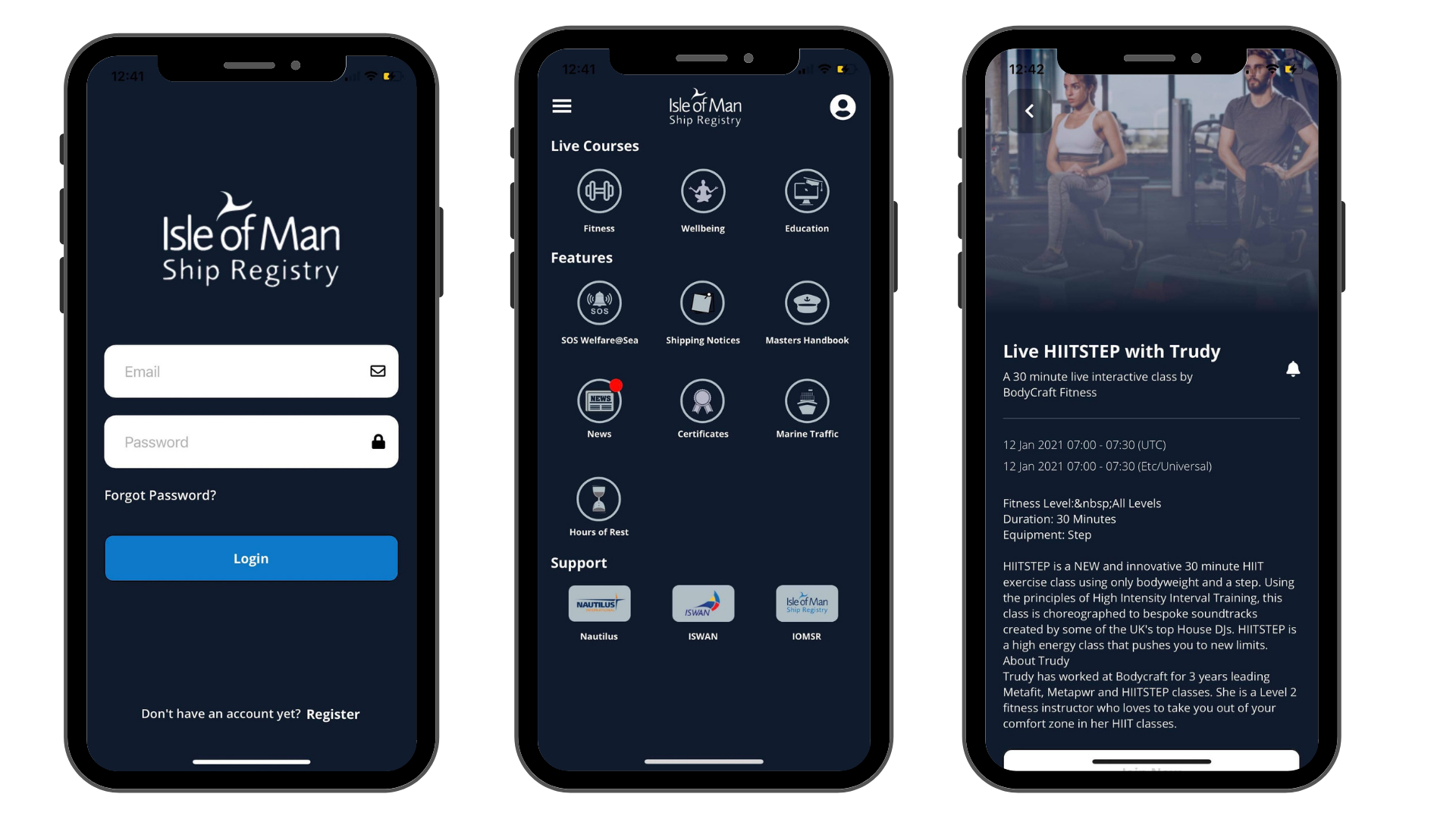 The Isle of Man Ship Registry has formally launched the first ever seafarer welfare app designed by a flag state.

Isle of Man Ship Registry director Cameron Mitchell said the app, named ‘Crew Matters’, has been developed in partnership with Liverpool-based training company Tapiit Live and is the most advanced of its kind ever produced for seafarers. He said the app has just gone live and is available to around 10,000 seafarers sailing on more than 400 vessels under the Isle of Man flag.

The launch is particularly timely as hundreds of thousands of seafarers began the new year separated from their families, with 400,000 currently working beyond their contracts, according to the International Maritime Organization (IMO).

Cameron, who served as a marine engineer at sea for 17 years with shipping lines including Maersk and Farstad, said the app has been created primarily to tackle the immense challenges facing seafarers brought into sharp focus by the coronavirus pandemic.

“Safety is a fundamental pillar of our ethos as a high-quality flag state,” he said. “Even before Covid we recognised that something had to be done that delivered tangible results to help seafarers in the wilderness of the sea. The catalyst was an apparent suicide on a vessel sailing under our flag and we recognised that while there is support for seafarers in port, through the many brilliant chaplaincies and seafarer charities, the ‘weak link’ is support while at sea. I raised it at the Red Ensign Group and with the seafarer charity ISWAN and it was clear to us that the problem of seafarer mental health was becoming more acute, with seafarers spending more time alone in their cabin than ever before. The app has many functions but a key one is to provide social activities such as live gym work-outs to get seafarers interacting more on-board to combat that isolation.”

Cameron said as well as making the app, Tapiit Live will live stream its award-winning training classes via the app.

“The app provides structured welfare support for the seafarer, ranging from a health and wellbeing self-help library that includes nutritional advice, through to Tapiit Live’s interactive support sessions,” he said. “Users will have access to a full month’s agenda of physical and mental wellbeing classes and educational trainings, including fitness and yoga sessions. Seafarers can also log their work and rest hours, and if they feel stressed or unwell there is a live SOS function which provides immediate access to the Seafarers Help Live Chat, which is free, confidential and available 24-hours-a-day, seven-days-a-week. In addition, the app connects with global seafarer charity Stella Maris and enables seafarers to find contact details for the organisation’s chaplains in 54 countries around the world."

On a practical level Cameron said the app also tackles the problem of storing seafarer documentation in one place, as well as providing a link to trade union Nautilus with details of membership, news, careers, and jobs and training opportunities.  He said the app contains a wealth of information from the ship registry including the master’s handbook, shipping notices, IOMSR news feeds, marine traffic and local port services.

“The feedback we are receiving from ship owners both clients and non-clients is really positive,” he said. “Ship owners want to find new better ways to help and protect seafarers, and want to embrace digital innovation. We hope this app will be a step forward for the industry and make a positive difference to many thousands of seafarers sailing under the Isle of Man flag.”

Richard Turner, Tapiit Live CEO, said: “It is brilliant for Tapiit to work with the IOMSR and produce what is arguably the most advanced app ever produced for seafarers. The important thing is that it is giving seafarers more practical and emotional support at a time of real need. We really look forward to building more functionality into the app and hearing seafarers’ feedback.”

Ian Stokes, Head of Corporate Engagement and Partnerships for Stella Maris, the largest ship visiting network in the world with chaplains in more than 300 ports in 54 countries, said: “Stella Maris provides a trusted friend in a foreign land for tens of thousands of seafarers each year. The simple act of talking confidentially to our chaplains about personal issues - loneliness, family separation, illness, finance, faith - can make the most enormous difference to a seafarer's mental wellbeing.  More serious concerns also emerge - health, bullying, assault, denial of shore leave, payment problems - which are dealt with, in confidence, with the support of other maritime bodies.  We are therefore delighted to be a part of this hugely positive innovation to give seafarers as much help as possible to cope with one of the most difficult jobs in the world.”

Roger Harris, Executive Director of the International Seafarers’ Welfare & Assistance Network (ISWAN), said: “We warmly welcome the development of the app that will give seafarers access to our 24-hour helpline, SeafarerHelp. We congratulate the IOMSR for this initiative that will benefit the wellbeing of seafarers.”

Mark Dickinson, General Secretary of Nautilus International, said: “Seafarers can be away from friends and family for many months at a time, undertaking vital yet often physically and mentally difficult work. This new app will mean that seafarers and Nautilus members will have access to news, support and vital contacts to make sure that they have everything they need while they are at sea.

“We are pleased to see the Isle of Man Ship Registry continuing to find ways to maintain high standards for the flag and we are pleased that their seafarer welfare app will help us to fulfil our commitments to being wherever our members are. We look forward to seeing the app develop further to support seafarers on Isle of Man-flagged ships."